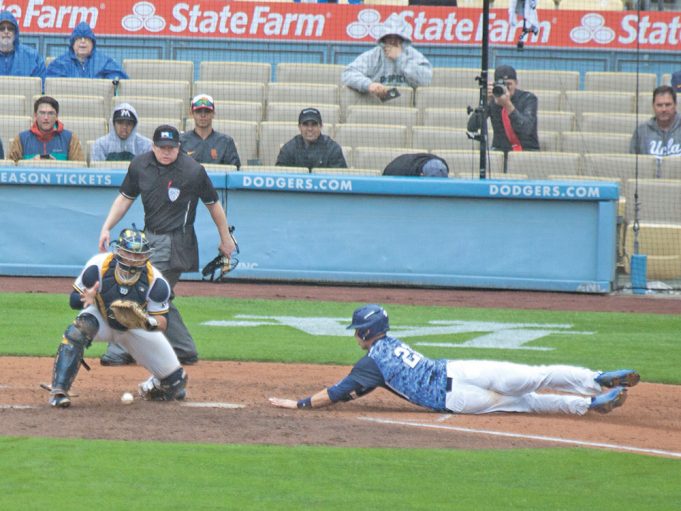 Republished from Referee.com
The evolution of the mechanics of calling plays at home plate has been fascinating to observe.
Plate umpires can make decisions on 250 to 300 pitches in a game, but one call at the plate might decide the outcome of the game. Consequently, the umpire community commits a lot of training to developing the best ways to judge plays at home plate. For many decades, umpires approached plays at the plate using the first-base line extended method, commonly referred to as 1BX. Plate umpires stand at an imaginary line that would extend the first-base foul line into foul territory past home plate.
About 20 years ago, a new technique emerged called third-base line extended known as 3BX. This is the opposite position from 1BX with plate umpires standing on an imaginary line from the third-base foul line.

The gradual change in this practice recently produced a new tactic called, “The Wedge.”
“I first learned The Wedge at a camp three years ago in New Jersey,” said Mike Lum, a 20-year umpire who has worked on the college level for the last five years. “I’ve had conversations with minor league and college umps about The Wedge and we all wonder why we are just hearing about this. I think the major league umpires have been using this method for a while, but someone coined the phrase The Wedge only recently.”
From all accounts, The Wedge has been practiced for 5-7 years in the northern Virginia and Washington, D.C., area before blossoming recently into a hot trend on the East Coast over the last 2-4 years. The other dynamic that has widened the use of this new mechanic is the increased movement of catchers who want to avoid violating new obstruction rules during plays at home. Catchers are now starting several feet in front of home plate as opposed to standing on or near it in the past.
So why is it called The Wedge? Think of a shape of a wedge or a triangle. The two sides of the wedge represent the path of the runner and the flight of the ball. An umpire using The Wedge would be in between those two lines to see the point of the play where the tag is applied.
Chris Marshall is a major advocate of The Wedge. Marshall has worked college baseball for the last 21 years and appeared in his fourth NCAA Division I Super Regional last year at the University of North Carolina.
“I’ve completely bought into using The Wedge,” said Marshall, who is the interim president of the New Jersey-based United Collegiate Umpires. “I can remember missing two plays at the plate in a Division I postseason tournament game a few years ago because I was using the old-school thinking. I read the plays correctly but they developed differently than I expected and I got them both wrong. The Wedge now gives me a whole new view of plays at the plate.”
The 1BX and 3BX positions have been commonly taught as places to stand and watch. The Wedge, however, is all about movement and putting umpires in a position to see the play completely and correctly. A key difference between The Wedge and the 1BX-3BX methods is that the home plate umpire is keying off the catcher’s movements to gain a good position to see the play. Using 1BX and 3BX, umpires use the flight of the ball. It is a new mindset.
“In the past, umpires would choose a pre-determined place to stand, either at the point of the plate or at the first-base or third-base line extended. That puts umpires in a pretty good position to see most plays. But if the play explodes, they will not get the best angle,” Marshall said.
Marshall cites four specific plays where The Wedge helps umpires get the optimal view at plays at home plate:
“I had been using third-base line extended for years until I learned The Wedge at a clinic two years ago in Binghamton (N.Y.),” said Sal Algozzino, a 23-year umpire who has worked two D-II regionals in his career. “The Wedge allows you to see all types of plays at the plate, but you can’t just stand in one place like we used to do. You must be very aggressive and be ready to move.”
When using The Wedge, some instructors say umpires should act like backpacks for the catchers while others urge umpires to stay on the catcher’s glove-side hip. Here are the mechanics of working the wedge:
Two key parts of The Wedge mechanic contradict traditional thinking about home plate coverage, according to Marshall. First, umpires have been taught to keep 4-8 feet away from the play to have a wider field of vision. Second, umpires have been advised not to go into fair territory to call plays at the plate. Umpires using The Wedge often wind up in fair territory in front of the plate or even up the third -base line.
Marshall said, “The Wedge can be difficult to grasp right away but it is worth sticking with it because of the advantages it gives you in seeing the play. The game is changing and we need to change with it. As umpires, we might see a close play at the plate once a month so it may take a while to practice it. I wish we had more bangers at the plate so we could work on it.”
Tim Gaiser, a 23-year umpire who has worked college baseball for the last 18 years in upstate New York, is another proponent of The Wedge.
“I learned The Wedge four years ago and I now apply the wedge fundamentals to plays all over the field,” said Gaiser. “The Wedge has helped me immensely. I look at it this way: I umpire baseball games involving boys ages 15-22. They stay the same age every year but I get one year older every year, so I need to find ways to be more efficient. The Wedge challenges what has been taught for years, but it puts us in the best place to see the play. It makes us better umpires.”
Tags:
Baseball
Softball
Mechanics
nfhs